Brom and Хid, the Christmas Scamps

Brom and Хid, the Christmas Scamps

– Elf take your leg, Brom! Why, for the love of dung, did we even steal this costume?!
– Calm your titties, Xid! The job’s solid. With this costume we’ll get so much gold that you’ll be wiping your arse with it soon.
– How about you wipe your arse, you toadlicker? You’re fidgeting it all over my head. Look at him, sitting there comfily – all he has to do is move the sticks, while I have to drag the skis along with you on top!

From the side the two quarreling goblins were a peculiar sight to say the least. First of all, they were dressed in a long red frock. One for both, so that only the legs of the bottom goblin could be seen, along with the arms and head of the one on top. Second, on the head of the top goblin was, for gods only knew what reason, a deer head with jingle bells hanging from the horns. He held ski sticks in his hands, but managed to land them in the snow only occasionally. Now and then the sticks would land in his companion’s side. All this construct slowly, but steadily moved along the nearly empty streets and alleys towards the main city square.
– Why are the humies gonna give us gold, anyway? – The goblin below by the name of Xid was clearly skeptical both about the necessity of the costume and their advance towards the center.
– Hedgehog bite your mother, Xid! I told you already. The pinkbutts have a celebration in Winter. Somethin like the year endin or some such pigeon dung… So, on this celebration there’s this man walkin around with a deer to people’s homes. Or with a deer head. I don’t remember. So anyway, they got to give the man gold, or he’ll eat them alive. – Brom snapped his yellow teeth for further emphasis.
– You sure you didn’t mix anything up? – Brom’s backside pushed on the top of Xid’s head, and his friend’s stench under the frock made his already green face even greener.

Instead of an answer, Brom sent his ski stick where Xid’s back was under the frock. The goblin at the bottom yelped from indignation, but otherwise remained silent.

Vallor’s central square was full of people. In the middle stood a tree decorated with balls of different colors, candy and candles, and underneath it did indeed sit a fat man in a red frock. Although his head was quite human, Xid couldn’t see it, however, and Brom decided to not pay it any mind. Nobody seemed to give the man any gold, on the contrary, he was giving away some bright boxes to human children. Perhaps threats to their parents – thought the goblin, this made complete sense to him in the context of Winter celebrations.
– He, a deer! – a man headed over from the crowd, clearly drunk, and started pacing towards the goblins in an unsteady gait. – An why’s ye deer… hick…on skis? Oi, deer, where d’ye steal the skis from, eh?
– Where I stole em, you can’t find em! – barked Brom from under the deer head.
– And now, no one’s gonna find you either, meatball! – Xid’s green ugly face popped up from the middle of the frock and snapped its teeth dangerously close to the man’s crotch. Of course a goblin would be too squeamish about eating a human, but the drunkard didn’t know this.
– Uhh….Huh… Haaaaa!!!!!!! – the drunkard sobered up immediately, tried to turn and run, but one leg tripped over the other and he fell flat on the ice. It was in this state that he ran from the goblins – yelling and hicking on all fours. And on the ice lay a worn copper.
– Ha!!! – Brom started dancing on Xid’s head from joy – I told you, I told you, didn’t I? The humies throw their money at us themselves!

Xid muttered something, but not as angrily as before. It looks like he was also starting to get the festive feel of the plan as well.

Passing around the crowd, the goblins trotted towards the nearest home. Brom knocked on the door a few times, and a little girl, 12 years old by the looks of it, opened the door. She opened the door and gave the figure in the frock a long stare full of such indignignation and arrogance, that Xid, observing the scene from a hole in the cloth, started to sweat even more.
– And what do we have here, a scarecrow? You got the wrong house, honey, the freak circus is straight ahead and a bit to your right. The Guild of Clowns – down the street, the zoo – right behind it.
– The Holiday is coming! Hand over coin, or I’ll eat ya! – Brom’s voice lacked a bit of confidence, but he hoped the girl wouldn’t notice.
– Ha! You’re funny. – The girl digged in her pocket, fished out a silver coin and tossed it over under Xid’s legs. – But you better wash yourself, your stench is unbearable – With that, the impudent girl turned around, slamming the door right into Brom’s nose, who jerked at her with his jaws wide open. The goblin lost his balance and fell off his partner.
– Why you…! I’m… FUNNY?! I’ll kill that little squirt! I’ll sell her off into slavery to the Akkari, she’ll be breeding leeches until the end of her days! – Brom was just about to dash to the door, as he noticed guards coming from around the corner. He kicked Xid and they rushed towards the nearest garbage pile. The goblins didn’t particularly want to try taking on armoured and armed guards.

The green rascal was knocking on the next door with all his goblin might. Nobody was answering however, and the goblins decided on an invasion. Brom got inside the window (the deer head of course didn’t exactly help, bumping into everything and getting stuck everywhere), opened the door from inside, and Xid stumbled into the house, like an elephant in a porcelain shop, tripping over his frock and making a spectacular mess with his skis. Alas, the only object which seemed to have any value whatsoever turned out to be fake golden gilding on the toys of the holiday tree. Brom was about to head out, issuing profanities on the way, as Xid called to his companion:

What is it? Ho-ho-ho! What have we here?- In the table drawer they found a mortgage certificate for the house. It seemed the owner barely made ends meet. Gears and cogs started moving inside Brom’s green head and he understood that they could extract some sort of profit out of this. But that was a matter for later.

The next house which the goblins chose was a tad richer. On a hill, with three floors, columns at the entrance and extravagant decorations in the yard. This time, a child dressed in a cuirass with a sword at his belt opened the door. After appraising the deer-headed figure with a look full of contempt, he seemed to consider for a few moments, whether it was even worth lowering himself to a conversation with THAT, and then spouted through his teeth:
– Whatdoyawant?
– Give us money! – The goblins barked in symphony.
– Why you bas… – Brom didn’t even finish speaking, as his teeth were smashed in by the hilt of a sword. The second arm of the guard landed where the solar plexus should have been located in a human, but stumbled into something different instead. Something very intimate. The goblin on top took the highest note in his life, fell from the bottom one’s head and started rolling down the hill.
– Holy cow, goblins! – The bloke was surprised, as he watched Xid trying to wriggle out of the frock. His next move was a strong kick, and the second goblin was sent flying after the first one. – Happy holidays, dumbasses!

As they climbed out of suspiciously yellow snow, Xid kicked Brom in the ass.
– Your plan is dung! And your deer is deer dung! And you’re goblin dung!
– I’m gonna stuff that dung right back into your throat, pigeon dung!

The goblins grabbed each other and started rolling across the snow, blowing off steam for their soured evening. All while festive New Year fireworks lit up the night sky.

Be the first to review “Brom and Хid, the Christmas Scamps” Cancel reply 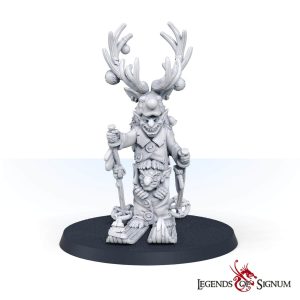 You're viewing: Brom and Хid, the Christmas Scamps € 13.50
Rated 0 out of 5
Add to cart
Sign in Create an Account
Lost your password?
X
Shopping cart close