“What do you know about vampires? What legends did you hear in your province, city, or village? Maybe that they turn into a giant bat? Or into a whole swarm of little ones?” Said a huge Wolfen with a medallion in the form of grinning puma looked at two people travelling with him in a cramped peasant cart. They all were lightly armed; one dressed as a native of free baronies, the second resembled a citizen of the empire, specifically one of its southern provinces. Both had barely finished their studies and joined the brotherhood of hunters.
“They are partially turned into a bat! They have webbed wings instead of arms, and the sun blinds them!” The imperial answered.
“They are indistinguishable from humans, and if they want to escape, they turn into grey smoke and fade away. And the sun does not blind, but immediately kills them!” The northerner argued.

The charioteer grunted as he listened to their conversation and lifted the collar of his cloak.
“You’re both wrong.” Wolfen smiled, while the youngsters looked like they’re ready to argue until blue in the face “Although you can be right too. Different vampires have different sources of power. Some of them made deals with creatures from the lower worlds, others became victims of the curse, and still others… however, it’s too early to talk about it. There are many options, and only one thing unites them: mortals are just food for them.
“So how are we gonna kill them?” One of the young hunters asked.
“Chop off the head, or drive an aspen stake into their heart. Even if it doesn’t kill the vampire right away, it will give enough time to burn the body and scatter the ashes.”
“Hey, the vampire slayers! We arrived!” The charioteer stopped the cart near a small village. “I won’t go with you further. People are not welcome there.”

The hunters paid off with a few copper coins and continued to move on foot. The charioteer turned the cart and very quickly disappeared behind the nearest hill, where he jumped off the cart, walked over to the horse and twisted its neck in one motion. The sun, slowly sinking beyond the horizon, illuminated the man’s cloak that has turned into heavy webbed wings. Despite the shady charioteer’s words, nobody disliked people in the village where he landed the hunters as this settlement has been abandoned for over a decade… Like all other villages within a three-day walking distance. After the Cataclysm, all springs and streams in these parts dried up making the lands unsuitable as a place to live.

The vampire flapped its wings several times and flew up to such a height that he was no longer visible from the ground, but was able to see the hunters wandering towards the village well. The question is, who is the hunter now, and who is the prey? The vampire just watched over his victims pacing the traps, not realizing that they were already trapped. On the third day without water, their end seems inevitable…

Be the first to review “Cardal, Wings of Death” Cancel reply 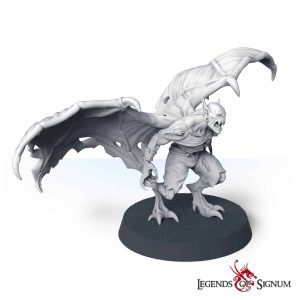