Jock and Phosphorus, the Thieves of Christmas

Jock and Phosphorus, the Thieves of Christmas

Filled with boxes, a single candle was all that lit the room. Behind a rough, thrown-together table sat the thin old troll Jock. He was the only one remaining in the town hall, counting the profit from his “fellowship of guards”. Bankers, traders, counselors along with their assistants were long celebrating the winter solstice at home with their families or amongst high society at balls and feasts. While someone, perhaps, was celebrating it at the market square of the lower city, amongst the poor. [read more]Jock on the other hand preferred the company of endless contracts and receipts. Packed not even in chests, but in cheap crates made of thin wood, like in the peasant markets, they took up all the space up to the ceiling. The “Fellowship” didn’t guard it for their clients. The clients paid so that the guards wouldn’t trash their businesses. Even the Guild of Merchants couldn’t deal with those who were backed by the council of peers. And the peers had a cut.

Suddenly, footsteps could be heard. To Jock, who didn’t hear anything except for the scribbling of his own feather for hours, they seemed deafeningly loud. The eco of each step rolled across the empty corridors. Finally, the troll’s door began to open with a creak.
– Phosphorus? Have you forgotten something? – Jock looked away from the papers and squinted.
– Master? – A small goblin walked inside the small space that was lit by the candle. – You had sent for me yourself, did you not?
– No. Are you drunk?
– A bit. – The goblin started giggling and drew a huge bottle of wine from behind his back. – Master, do you perhaps know who stomped around so loudly in the town hall?

The troll put aside his feather and gave the secretary a sharp look.
– And so, everyone is here.. – A new hoarse voice rumbled across as thunder. The door shut with a clap. The bottle fell from the hands of the scared goblin and shattered. – I must say, you have sparked my interest.
– Who is it? Show yourself! – Jock stood up from the chair, taking a club in his hand.
– My name is Krampus – An enormous horned figure emerged from the shadows – And I have come with gifts in honor of the solstice! For you I have…retribution!
– Get out of here! – Shouted the troll, with his weapon stretched out in front of him.
– I cannot. Without you. – Krampus grimaced in a mockery of a smile. – All greet this celebration with those who are dear to them most. And to you Jock, money is the dearest of them all. But what do you do with it? You live on bread and water, with no luxuries about. All alone. Why?
– None of your business!– Jock roared. – Get out!
– Has the gold of your debtors made you happy? The gold which you received from the Guild of Alchemists, for the vote again the league of doctors? The gold which you and your “guards” took possession of, by simply beating up your clients… Amongst them were those who built houses for those who lived here, those who lost a roof above their heads due to the war. Has their death in the freezing cold made you happier?
– I have nothing to do with that! – Shouted the goblin and ran towards the exit. He yanked at the doorknob several times but it was futile, the door did not budge. The secretary turned to Krampus in horror.
– Ah, yes. I had almost forgotten about the slightly less naughty one. – Krampus turned to Phosphorus. The goblin shriveled up in fear and started weeping quietly under his gaze. – You helped him in all his doings. Of course, where force was not required. And at the same time you have been stealing from your master for many years. Not nearly in the same scope of course, but you two are most certainly worth each other! Two mortal wrongdoers weave the fates of others as if they were gods. But not all gods take kindly to such a thing.
– You apparently did not hear my words? – Jock stepped away from behind the table, waving his club in wide strokes. – Get out! And I will speak with Phosphorus later.
– You do not order me, mortal! – The walls shivered from Krampus’ roar. The troll froze, as if bound by magic. – I am the judge here, and you shall obey me. And it seems I have come up with your punishment – you shall have to say your farewells to the gold you love so much. You shall buy gifts to children for it, every year, until the end of time, you shall place them in the houses of the descendants of those who suffered from your machinations. And there are so many of them, that in each city, village and corner of this world, you will find someone.

Be the first to review “Jock and Phosphorus, the Thieves of Christmas” Cancel reply 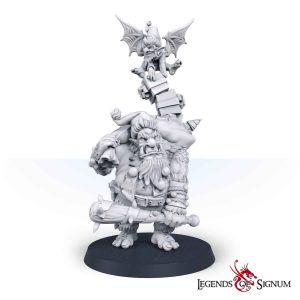 You're viewing: Jock and Phosphorus, the Thieves of Christmas €16.00
Rated 0 out of 5
Add to cart
Sign in Create an Account
Lost your password?
Shopping cart close