Kamidar was a lucky one. Few of his fellow wolfens were sitting pretty – he was a fighter in Snoppy Sadivh’s clique. He was given a fancy name – the Devourer of Dragon Liver (even though he’d never seen any).

Only once Kamidar got bad luck: one sorcerer hired their clique and wanted to see the fighters. Sleepy Kamidar turned around, hooked a valued artefact… And smashed it to smithereens.

Only the advocacy of Sadivh kept the angry sorcerer from turning the wolfen into a toad. Now he had only one concern: how to get some money. Sadivh suggested going for a dragon hunt. And justify the name – the Devourer of Dragon Liver too.
«Or I’ll find a treasury hoard, savvied Kamidar.
«Or I’ll sell dragon’s blood, fangs and claws!» 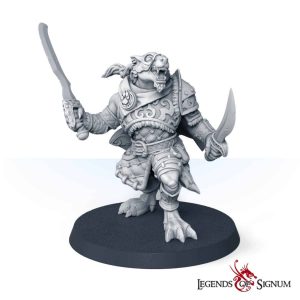