Ramona was born into a family of fishermen in the small port town of Aspeross that is not far from Russadir. Life in the town was monotonous, boring, and very poor. The main reason for such bad life is that the Empire was famous for its warriors, but not for its navy, and the only ships that entered the port were either pathetic fishing boats, which were slightly larger than a boat of Ramona’s family, or the military. The second happened so rarely that it became a real holiday for the town. Even the smallest warship in their town is greeted by onlookers from all over the area with celebration.Ramona has always been at the forefront. The girl dreamed that one day she would command a real warship, but the trouble is that although women could be hired for service in the steel legions, the imperial fleet was strictly against their presence on the ships. No matter how the Emrys’ Church scolded people for superstition, the sailors still blindly followed these customs.

Everything changed when rumours of a crusade came as the emperor was gathering an army. Warships filled all the harbours, and even in Aspeross blue and gold flags were flying over the dock. The treacherous Vallorians hired pirates to lock the Empire’s ships at sea, but Marshal-Protector Roland smashed the blockade to pieces. With the help of Grypharims, they dropped huge stones from the sky directly onto the pirate flagship, and it changed the course of the sea battle. When the “sea reapers” recovered from this shocking strike, the great protector marshal went to them from the skies and gave a choice, to be destroyed or to side with the Holy Empire. The pirates did not think long, so black and blue flags were eventually added to the blue and gold flags in the harbour.

Ramona realized that she would never get another chance.

The pirates were nowhere near as superstitious as the Imperial Navy as they had their own ways of negotiating with the jealous goddess of the sea. The young girl was already experienced in the sea, and thirsty for adventure, so was gladly taken aboard the ship called “Mermaid’s Skeleton”. The skills she learned in the family’s fishing boat, as well as in fights with her brothers helped her adjust pretty quickly.

She liked the reckless pirate life, and the pain from the wounds received in the first battle could not break her spirit. There were indeed a lot of great things in the pirate life. The girl had new rich clothes, which the Asperos fishermen never dreamed of, freedom from the sermons of priests, the endless blue sea, and, of course, the excitement that she felt when they captured other ships with the crew – everything was like in her dreams.

The girl could quickly master any weapon, and she had no equal in battle, although no one had taught her to fight before. The sailors joked that the sea goddess herself sent a lucky wind at the girl’s back.

Be the first to review “Ramona the Tailwind” Cancel reply 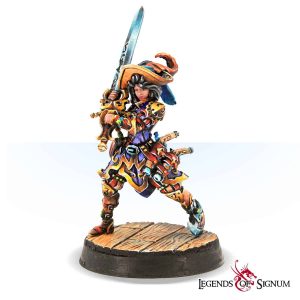