This great terrain is used in the “Legends of Signum” tabletop wargame and replaces the respective terrain template. It is perfect for most board wargames in which terrain is used.

A young knight was stomping heavily on scorched ground, and dry blood stains were glowing dark on his templar’s cloak with a Tartus cross. Just yesterday, at sunrise, before they met the monster, there were three of them — the order mentor, the elderly sergeant and himself. The mentor, the highest-ranking among them, was the first to perish. He was not scared by the grue that attacked them, but the swift death of the senior knight made his companions forget their vows and run from the beast shamefully. Though they didn’t manage to run away. Before drawing his last breath the sergeant, an experienced warrior who had spent many years in these lands full of dangers, was able to say: “This fiend will gulp us as it did the brother mentor, and he was so much stronger than we are, and his sword was blessed with the grace of God. Accept this, lad. Your only chance to finish off the monster is to get to the tower”. Blood drained from the young knight’s after hearing the sergeant’s words. None of the brothers dared approach the tower under fear of death. But when the death itself was at his heels, no order mattered.
The blade in the knight’s hand was trembling visibly. He seemed to feel the approaching beast and its foul breath with his very skin. But minding the sergeant’s last words, he was fiercely moving forward. Half-burned tree trunks and numerous animal skeletons around him were thickly dusted with white ash reminding frost dew. The tower outline had been looming ahead for a long time.
The Magical Spire was devised to guard the border lands from the spawns of Acheron filth. It stood very high, dividing the two suns of Signum in the sky — the older brother Callihorm and its younger brother Karm. The four planes of the Spire faced all the corners of the earth. A stone griffin holding a stone sphere sat on each plane. The griffins’ shoulders were supporting the top level of the tower where a huge magical crystal was ablaze day and night. The young knight didn’t know at which distance the tower had power.
The knight stopped. Something cracked treacherously under his foot, and the sound was horrendously loud in the complete silence. The knight bent and produced a piece of a human skull from the ashes. Disgusted, he threw the piece as far away as he could and suddenly saw a beast there. After all an Acheron spawn came after him! The long wriggly body, made of dead flesh, reminded a snake or a worm. It had a hideous head with eye sockets flaming with filth, and long ugly arms with dagger-like claws. The monster was not afraid of simple steel blows: dozens of arrows, broken swords and lances were stuck in its body forever. The beast was drooling with poisonous saliva.
– What are you waiting for?.. I am here! Come and take me. — the young knight cried with his last ounce of strength, lowering the blade, so useless now.
The Acheron worm lunged at him with a bloodcurdling scream. And in that moment the tower crystal began to roar and filled the stone sphere in the paws of the griffin facing them with energy. The magical beam from the sphere hit the fast approaching monster, and the stunned knight saw the worm turn into a heap of ashes. The risen wind blew it around, leaving the knight with the ash taste on his lips. It was over.
The dreadful tension was relieved. The young knight dropped his blade and stumbled back. The tower crystal began roaring again, filling the stone sphere with deadly energy…

Be the first to review “Magical Spire” Cancel reply 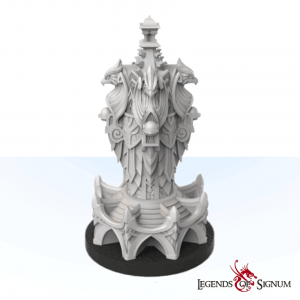