Odenat, the King of Grypharims, fell in love with the beautiful daughter of Magal, the governor of Ashara, at the first sight. All citizens of the capital were charmed with Zenobia and joyfully greeted her in the streets of the city, calling her the White Queen. This union seemed to be blessed by Aria herself, but their happiness didn’t last long.
The great kingdom was defeated in the war with manticores, and Zenobia’s king and sweetheart was treacherously killed. The leader of manticores hated Grypharims, but his hatred for Zenobia was much more deep and personal. Trying to save her people — and her unborn child — the Queen led Grypharims to Signum.
When the son of the royal couple drew his first breath under the sky of the new world, Grypharims rejoiced. They believed the birth of prince Celebrian to be a good sign. But their life in Signum was not destined to be calm either, and the empire desolated by a cataclysm and civil war harbored the winged people. Realizing that they could not survive in the new world without allies, Zenobia made an alliance with Roland, the protector of Demien, the baby emperor. Acting together they were able to bring peace and order back to the country. Their path was not easy — Grypharims had to fight many battles, and Zenobia acquired a bitter enemy in the person of Pontifex Conrad, head of the Church of Emris. The church acolytes even intended to commit the queen to the flames accusing her of not being human.
As years passed, the empire became the new home for Grypharims. Commoners see Grypharims as their saviors and heralds of the Skies and regard the winged queen with deep reverence. Even the noblemen accustomed to despising non-humans learned to respect her. But Zenobia does not let her guard down, because traitors could hide among her allies, and the pontifex is not happy that more and more people choose to pray to Aria, and not Emris. The queen knows how fragile the world is, and she will do anything in her power to protect her people from new misfortunes.

Be the first to review “Goliath” Cancel reply 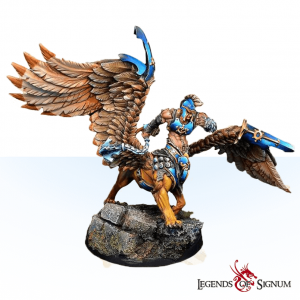