“Recklessness is her second name. And better to say, with the capital – Reckless. Yes! Recklessness
flew in her blood even before she became the leader of “Demented Bastards”
Wolfen Roar.

Before becoming the Lord of War in the Free City, Vallor Brissa had already changed dozens professions. She’s definitely lucky to stay alive, despite the fact, who she was and what she did. It’s better to start with the fact, that we don’t know if her name is real or this is just the legend created by the Illuminati Order. Because Brissa was at their service in the Griffon’s Empire for a long time. Brissa was sent to Vallor with a secret assignment: to find and return an ancient artifact, the Heart of Vortirus. Even the fact that such an important objective was given to girl, says a lot.
When she arrived in the Free City, Brissa has decided to break with her past forever, because it wasn’t her choice to be a blind instrument in the hands of zealots. Brissa helped to save the world from the curse of powerful artifact and became a free adventurer in Vallor. She took the name of de Molforn, which supposedly belonged to her uncle.
During the invasion of Daishan elves, she headed “Demented Bastards”troop. Her squad contained only absolute wretches and mercenaries with complete and total lack of anything resembling warrior discipline, but Brissa has managed to inspire them with her own example. At the time of the fights for the Upper city they used the underground tunnels of the Free City to sneak into Daishan camp. With a rapid struck “Demented Bastards” caused permanent damage to spider elves. Only a miracle saved the Queen-Mother but still she got shot by Brissa.
Vallor was saved and Brissa became the living legend. The new Duke Khan Dir considered that her glory and authority were dangerous. So Brissa was framed and then imprisoned in “Thousand Screams” prison. When she heard about the future revolution is going to happen in the city, even imprisonment didn’t stop her. Brissa has managed to ruin evil plans of her old foe wolfen Hidrex. Duke Khan Dir had to acknowledge her and Brissa was the first woman to be elected as the Vallor’s Lord of War. This honorary position allows Brissa to rule all armed forces of the city and during periods of war, she has the same rights as the Duke.

Brissa de Molforn is an awesome gunslinger and experienced warrior. She fights riding a semi-mechanical beast produced by The Ortus Automaton Corporation. Brissa considers her own challenge to confront Emperor’s Demian crusade in Vallor city. So she is preparing to fight Griffon’s Empire army beneath the city’s walls and isn’t afraid of meeting face-to-face Roland the Proud, the most glorified knight of the Empire and, probably, of the whole Signum. 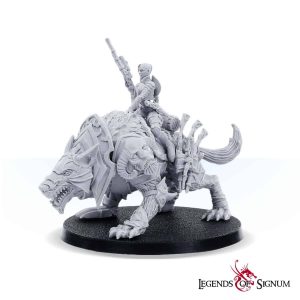