Need to make someone bleed?

Vallor is the largest city in Signum. A myriad of humans and members of other races live there. Most citizens dwell in the streets of the lower city where squalor and insanitary conditions are ubiquitous and sewage waters flow right under walkers’ feet. A Black Plague or Mad Trembles epidemic is always a real threat in the city. Ships from all over Signum arrive to the city harbor, which also doesn’t help with the chance of unknown infections spreading.
Michelle Gaccini took the struggle for the city safety in his hands. In the past this croaker gained vast experience working in the city morgue. When a Black Plague epidemic started in the harbor and the lower city, Gaccini captained the city team fighting it. Thanks to his decisive actions the plague was stopped. Gaccini ordered to cordon off the infected lower city quarters and introduced strict quarantine. The houses of sick citizens were boarded up with the residents inside. Fires were started in the streets to burn things touched by the sick.
At the annual Vallor conclave of doctors, healers and wisemen Gaccini was the one to adamantly disapprove the views of highly respected Ambrozius. – He tells his patients about tiny creatures, hundreds of times smaller than insects, who are allegedly always around us and can get into an open wound if we don’t close it with a bandage or don’t wash surgical instruments before surgeries. I’ve never heard such skimble-skamble! Invisible tiny creatures! Ha! The reason for every disease is imbalance of the four sacred fluids in the patient’s body: blood, saliva, sweat and yellow bile. And excessive cleanliness, like frequent bathing and fresh air, facilitates the disease development.
With Gaccini’s participation the city guards forbade Ambrozius to practice medicine within the walls of Vallor, and the doctor was sent to the asylum for forced treatment.

Gaccini is the only character in the Free city of Vallor with Healing. But your characters will not be thrilled with such a doctor, seeing that sometimes his patients become subjects of his experiments…
This being said, nothing will stop you from proposing his services to your opponents. Their moaning and calls for help will be the best evidence of the efficiency of his treatment…

Be the first to review “Michelle Gazzini, the Plague doctor” Cancel reply 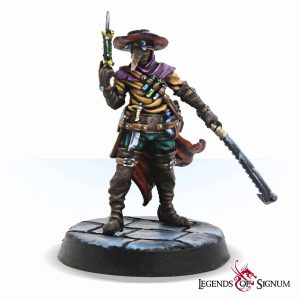