Celebrian, the son of King Odenat and Queen Zenobia, once was to become the ruler of the Grypharim country spread out on mountain peaks. But fate had other plans for him — Odenat was treacherously murdered, and Zenobia with her winged people were forced to leave their home world.
Celebrian was the first Grypharim born in Signum. His early childhood concurred with the years of the civil war. Having lost his father even before he was born, Celebrian experienced real terror when the inquisition of the Church of Emris captured and was going to execute his mother. At that time the little prince spent numerous nights looking intently into the sky and hoping to see Zenobia returning.
As years passed, the Empire named after the great alliance became a new home for the Grypharims. But while common citizens of the Empire adored the winged creatures, not everyone was so hospitable and warm. Only friendship with young Emperor Damien saved Celebrian from harassment on the part of noble children. They were willing to perceive the young Grypharim as a funny talking animal, but not as a partner in conversation or games. Celebrian and Damien got used to spend many hours together, not minding inevitable presence of their guardians. Damien was his friend’s first teacher in archery. Kiros, the knight who trained the prince in the art of war, was not understanding of Celebrian’s new hobby, but Queen Zenobia thought that bow and arrows would help her son, still too small for a heavy sword or lance, to protect himself.
Some escapades of the youngsters drove their mentors and court nobility to despair, especially the prank at a reception to honor Pontifex Conrad. But the older Celebrian was, the more he wanted to resemble his father, King Odenat, of whom he heard so much from his mother and knights. The young prince knew that it was his time to prove himself in battle and persuade Grypharims that he is worthy of leading them in future.

Be the first to review “Celebrian the Dawn Archer” Cancel reply 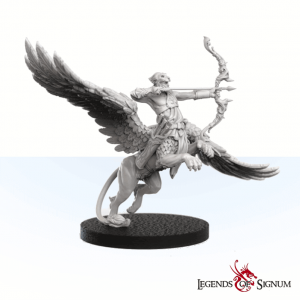