Taming an oronox is a difficult task. There were so many fractured skulls and severed limbs caused by strong beaks and giant claws of the giant birds before they finally turned into battle mounts. A hardy and quick oronox could easily carry a knight across the desert, and their claws and beaks become a dangerous weapon in a tough fight with enemies.

Riders quickly spotted this huge advantage in speed and agility, though not everyone could handle that giant and dangerous animal, and the birds’ speed and unpredictability sometimes wasn’t a positive factor for their masters.

Although Reno Damien certainly didn’t succeed as a knight, and he never was a knight, he was an excellent shooter and knew how to teach other soldiers. Thus, thanks to Reno there were a lot of ordinary riders who learned how to fire a pistol at close range, and later pistols even became a riders’ main weapon… The only thing that still had to be improved is a loud noise of these guns that could scare the mounts.

The oronox riders have become so formidable force that their enemies haven’t captured anyone ever, trying to kill the riders straight away, though it was extremely challenging. 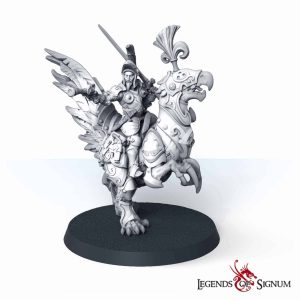